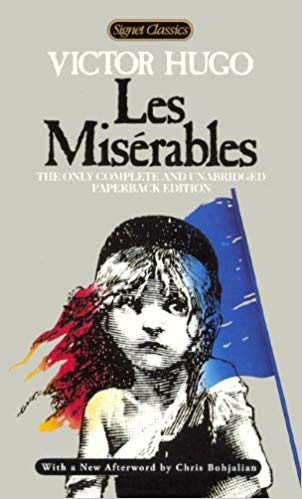 Back in April, I went to see Les Miserables on stage with my sister and our friend, Morgan. My sister cried throughout a significant amount of the time and I teared up a bit, as well. Although this is the second time I have seen the musical performed on stage, I have never read the book on which it was based. Watching the musical was the push I needed to pick up Victor Hugo’s huge novel. Because it is so very long, I have interspersed reading chapters with other short stories, comic books, and novellas, which lengthened the reading process even more, so ultimately it took me several months to finish.

Les Miserables is the story of Jean Valjean (formerly imprisoned for stealing a loaf of bread and now a released convict who has difficulty re-integrating into society) and his adopted daughter, Cosette. With notorious historical detail, Victor Hugo shows the underbelly of Parisian life in the 1800s: the criminals, prostitutes, street orphans, the starving poor, and the young students scraping by. He thoroughly examines their lives and backstories, their beliefs and desires, even their street slang to create a meticulous picture of the most wretched poor in Paris leading up to the June 1832 Rebellion. All of these characters and their interconnected lives support Hugo’s meditations on politics, religion, and justice throughout the novel.

Without a doubt, the strongest part of Les Miserables is the depth given to each character. Every person in Les Miserables feels like a profound case study in humanity and each character becomes intimately familiar as a result. Although it seems strange to begin the novel with the 50-page life story of a bishop who doesn’t appear again after approximately page 104, the comprehensive understanding Hugo constructs for us makes Bishop Myriel beloved to Jean Valjean and the reader alike. The introduction of the bishop as the prototype of compassion introduces Hugo’s apparent belief in the boundless mercy of God. In addition, he acts as Hugo’s savage critique of the reality of the priesthood, for Myriel is starkly contrasted with the greed and self-absorption of the religious orders at the time. Bishop Myriel’s influence is felt throughout the novel – all the way to page 1460 – both physically in the gift he grants Jean Valjean, and in the inspiration Valjean and the reader take in the example of Myriel’s love.

Jean Valjean is introduced as a rather wicked character; although his initial crime was one of self-preservation for him and his family, years of forced labor in prison have turned him to see only cruelty and as a result he himself is cruel and selfish. Later, after he has reformed himself on the promise he made to Bishop Myriel, he observes the wretched poor pulling nettles and (after expounding on the many uses of nettles) gives what is likely my favorite quote from the book:

“[…] And what does nettle need? Very little soil, no care, no culture; except the seeds fall as fast as they ripen, and it is difficult to gather them, that’s all. If we took a little time, the nettle would be useful; we neglect it, and it becomes harmful. Then we kill it. Men are so like the nettle! […]My friends, remember this: There are no bad herbs and no bad men; there are only bad cultivators.”

Valjean himself is exemplary of this. Because of the poor cultivation of the harsh life of prison he was given to wickedness, but was redeemed by the sacrifice made by the bishop. Other characters in the novel, although they receive many opportunities to do good, do not have the cultivation of unconditional love and do not see any life other than the one they live of theft, violence, and extortion. For example, the crook Thenardier is given a large sum of money by Marius at the end of the novel, but it is granted under duress and without the condition of reforming himself, and Thenardier uses this money, not to improve himself, but to invest in slave trade. It is clear Victor Hugo was critical of the prisons and harsh sentences of the time, although he does not believe that money alone will solve life’s problems – God must also play a role.

I enjoyed Hugo’s writing for how insightful he is on the human condition. Often, he is also very witty. Unfortunately for me, he frequently uses references to contemporary events and people that I am not familiar with, which means that many comparisons and jokes went over my head. Despite this, the writing successfully kept my attention throughout most of the book. Hugo’s descriptions of character interactions or internal conflict are very dramatic and romantic and even border on reminding me of “hysterical realism” although that term wouldn’t be invented for over a century after Hugo lived.

There are a few large exceptions, however. Although the story and characters are interesting, nearly a quarter of the book is comprised of asides on French history, culture, and politics. Including: over fifty pages devoted to a point-by-point account of the Battle of Waterloo; forty five assigned to the history of a convent in Paris and Hugo’s own critique of monasticism; over thirty pages are an essay on revolutions; over twenty are a description of the slang used by various sections of the French underclass; and twenty are anatomize the sewers of Paris. Some of these were interesting to me and others I had to push myself to continue skimming through until I reached the next section of action.

The action of the story may include gunshot and battle, but the true conflict is in the hearts of the characters and this is what causes the tears to flow. Hugo knows the hearts of the characters so well, that it is hard not to become emotional at an old man selling the last of his precious books in order to buy food, a child picking up spent bullets from battle while being shot at by soldiers, or a bitter grandfather finally letting go of vanity in the joy of seeing his lost grandson again.

Although it took me a long time to finish, and at times I struggled to keep going, it was with the sadness of parting that I finally put the book down at the end. Some day, I may even decide to re-read Les Miserables… some day in the future when I have a lot more time on my hands!

4 thoughts on “Worth the Wait: Les Misérables by Victor Hugo”