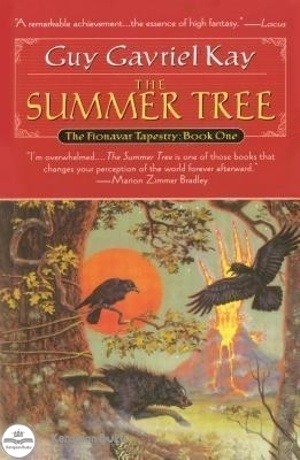 Guy Gavriel Kay is an author I admire. Most of his books are historical-fantasy adjacent. That is, the stories take place in another, more magical world, but these other places are analogous of a real time and place in our world, often with characters who are 1:1 representations of their real counterparts. (For example, Under Heaven is a fictionalized version of the An Lushan Rebellion, except full of ghosts and wolf spirits.) Kay has a skill for creating compelling characters and for writing moments that take your breath away.

For a long time, I’ve wanted to read Kay’s first trilogy of published books, The Fionavar Tapestry which is comprised of The Summer Tree, The Wandering Fire, and The Darkest Road. The Fionavar Tapestry is different from Kay’s other novels in that it is a high fantasy that takes place in a completely fictional world – “the first of all worlds” – that is connected to our own. There are no historical counterparts, but the Tapestry draws deeply on mythology and folklore. It is also heavily inspired by Tolkien’s works, particularly The Silmarillion; this is not at all surprising as Kay had only recently finished helping Christopher Tolkien compile the Silmarillion when he sat down to write Fionavar.

Unfortunately, this is clearly Kay’s first novel. You can see the hints of where Kay’s writing will shine in his later works: the character of Prince Diarmuid who is likeable despite his womanizing ways, the tragedy of Paul’s depression following the death of his girlfriend, and the beautiful description of the hunt by the northern horse riders seen through the eyes of a young boy. However, in The Summer Tree these talents are still rough. The book opens with a heavily clichéd prologue about a great evil that was defeated after an epic war and then held imprisoned. This prologue is so full of fantasy proper nouns, thrown pell-mell at the reader that it took me nearly to the end of the book to keep them all straight. Immediately after this, the first chapter introduces seven main characters all at once – again, it took me at least to the second half of the book to keep the five “chosen ones” straight. It would have been much easier if these characters had been fleshed out, but Paul, Kevin, Jennifer, Kim, and Dave all seemed to be cardboard cutouts of characters that did not act according to any internal motivations, but were moved around for the convenience of the plot – like the cutout of Michael Jordan riding around on a toy train in the McAllister’s window in Home Alone.

When a man claiming to be a wizard called Loren Silvercloak approaches the five University of Toronto students and asks them to come with him to another magical world called Fionavar, they trust Loren Silvercloak far more quickly than seems plausible for law students. When Dave is lost in the crossing, they don’t seem very concerned at all; rather, Kevin and Paul run off to help Prince Diarmuid get laid and Jennifer and Kim separate and wander off to speak with different witches. When political posturing reaches a peak and when threats on their life start occurring, they are remarkably placid. It wasn’t until the second half of the book which was focused on Dave, lost in the far north of Fionavar, that I started to feel a connection to any of the characters. It is only Dave’s section that makes me think there is still hope for the next couple books in the trilogy.

The main conflict is muddled, as though there are too many story-lines and mythologic tidbits that were smashed together to fit into too-small of a box. I started to get interested in the plot revolving around the expectation of the king to sacrifice himself on the Summer Tree, his failure to do so, and his son’s banishment. The idea is compelling, but it felt like there was a strain to fit it in and it does not reach the potential it should have. The kidnap and rape of another character seems to come out of the blue and the narrative or thematic purpose of it is not evident in the slightest.

For most of the book, the writing is stilted and overwrought. At its worst, it’s blatantly bad, such as the sex scene between Prince Diarmuid and a foreign princess. Frequently, Kay shows signs of his trademark deep, emotional moments. The problem is, in this book instead of feeling earned and profoundly tragic, these moments are forced and hollow. When the seer Ysanne says a final good bye to a water spirit she has imprisoned, it seems clear that the reader is supposed to sense a measure of her sadness and loss at a years-long relationship that is ending, but I was left simply wondering why I should care.

The world of Fionavar ultimately fails to enchant. Although it is full of magic, swordfights, sex, and “elves and orcs” – called “lios alfar” and “svart alfar” –  the trope of good and evil here lacks any subtlety and feels like nothing more than an ugly counterfeit. I will read the next two books in the trilogy out of the hope that a satisfactory conclusion will retroactively save the first book… but I won’t be holding my breath.

2 thoughts on “Even a Master Has to Start Somewhere: A Book Review of The Summer Tree”