After breakfast and elevensies, which were both sweet, it is time to turn to the savory for luncheon, afternoon tea, and dinner. Time management has never been my strong suit, but in order to make cooking 6 courses for 16 people work, it is absolutely key! So for lunch, I chose a soup I could start the night before and stick in the refrigerator, then heat up add the final touches in a short time in between The Fellowship of the Ring and The Two Towers. I thought of Sam making stewed rabbit in Ithilien when he wishes for po-tay-toes; “The Gaffer’s delight and rare good ballast for an empty belly,” as he educates Sméagol.

The soup recipe I used is from The Pioneer Woman. It is perfectly balanced with fat, brightness, and saltiness and will draw you back for seconds… if there is any left once you pass the pot around!

Add bacon pieces to a soup pot over medium heat and cook bacon until crisp and fat is rendered. Remove the bacon from the pot and set it aside. Pour off most of the grease, but do not clean the pot.

Return the pot to medium-high heat and add the onions, carrots, and celery. Stir and cook for 2 minutes or so, then add the diced potatoes. Cook for 5 minutes, seasoning with salt, pepper, and Cajun spice.

Pour in the broth and bring it to a gentle boil. Cook for 10 minutes, or until the potatoes are starting to get tender. Whisk together the flour and the milk, then pour into the soup and allow the soup to cook for another 5 minutes.

Use immersion blender to partially blend the soup leaving some chunks. (OR remove half to 2/3 the soup and blend in batches in a blender/food process until completely smooth. If possible, allow the soup to cool before blending. This is the part where I put it in the fridge overnight to make prep easier the next day.) Pour it back into the soup pot and stir to combine. Let it heat back up as you taste for seasonings, adding more of what it needs. Stir in cream, then stir in parsley, reserving a little for garnish.

Frodo, Sam, and Gollum in Ithilien by Sergei Iukhimov

For afternoon tea, I had my husband put together a cheese and sausage platter. “Little things” is one of Joe and my favorite meals, which is comprised of cheese, cured sausage, pickles, olives, fruit slices, bread and oil, and wine. You could also add boiled eggs, roast chicken or other finger food. Growing up, my family called this “snack supper” and we usually had crackers instead of bread and oil. At this point in the movies, people were still grazing on the cakes from earlier and the treats that some of the guests had brought.

For dinner, I wanted something really hearty. Although stew is often referenced by the characters, I felt that stew was too close to soup which was already served for lunch and chose to have a roast, instead. I put this in the crockpot before people arrived for the first film, which meant that it was ready just in time for dinner at the start of Return of the King. I found the recipe on Taste of Home and decided to use it in honor of Mrs. Maggot’s “mighty dish of mushrooms and bacon, besides much other solid farmhouse fare.” The original recipe says it is award winning, and I agree that it gets 5 stars in my recipe book! 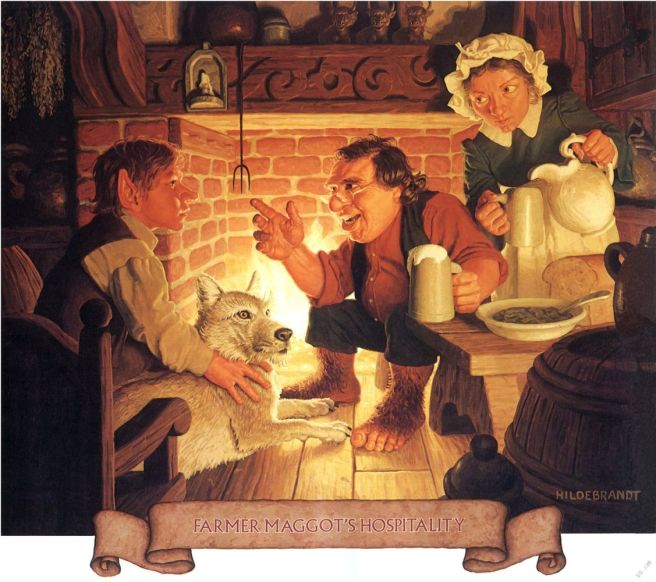